Electricity is used by the kilowatt hour (kWh), more commonly known as a unit. One unit is equivalent to 1,000 Watts (kW) switched on for one hour.

A unit is a definite quantity, it does not vary and cannot be diluted or changed.

The wattage of an electrical appliance is the "loading" and is found marked on the small metal nameplate of the appliance.

As the meter records watts and hours, it has a technical name of "watt-hour-meter" and this indicates units of electricity.

There are several types of meter dials - some older types of electricity meters have indicating dials, while others use a cyclometer register.

All of the electricity retailers in the Northpower network area are introducing advanced meters over time.

Below you can find some helpful frequently asked questions about smart meters.

How to read your advanced meter

The meter continuously scrolls through a number of screens.

The screens available will depend on how many phases your home has and whether you have separately metered hot water.

Read all the numbers including zeros, and note the register name for example 01-00208.3 kWh (as seen in the gallery below.) One of the readings is a total of the separately displayed meter registers.

How to read your older style electricity meter

If you'd like to keep a daily or weekly record of your electricity use, here's how to read your meter: 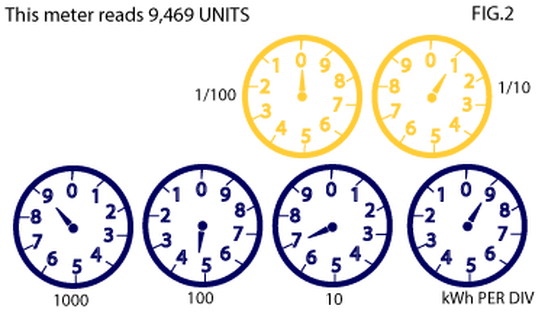 Ignore the small dials marked 1/10 or 1/100 and read the other dials from left to right. The dial hand should always be read as indicating the figure it has just passed, and not the one to which it may be nearest.

When the hand is between two figures, write down the lowest figure.

Go through the same process with the other dials, writing down the figures in the order left to right.

In figure 2, the reading of the meter is 9,469 units. Subtract your previous reading from the present reading and the difference will be the number of units used in the time between those readings.

Why has my electricity bill increased?

Increases or decreases in your power bill are rarely due to inaccurate or faulty meters. Visit our high power usage checklist to help work out why your power usage has changed.

Common household appliances and their use per one unit of electricity

A checklist to help find out where your high power consumption may be from.